Textile Touches of Escape and Migration 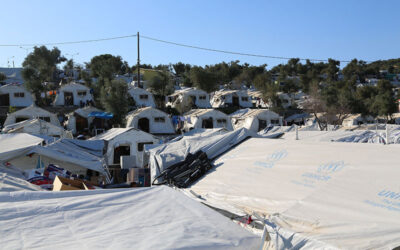 THE PANDEMIC IS OVER

The pandemic is over and finally workshops can take place.
From the beginning, Textile Touches was planned to bring together people with very different experiences and from very different backgrounds in shared workshop spaces. Meeting the other while working creatively on the same theme is what I wanted to initiate. The first ones are now taking place in Stuttgart, which makes me very happy.
I am working on having many more in other cities.

Although flight always has sad causes, I still imagine that there will be garment artworks that show very diverse emotions and experiences. Perhaps there is joy at having met someone who enriches one’s life. Or there is interesting friction taking place.

Obviously, flight, migration and integration will continue to surround us in the years to come. With the war in Ukraine, the topic is closer than ever for me personally. My deepest wish is to transform the stranger into a friend. 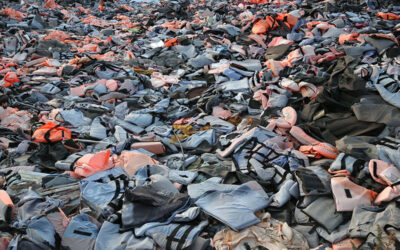 INVITATION TO PARTICIPATE IN THE COLLECTION OF LIFE VESTS

Because I receive an endless supply of office shirts at no cost, I began wondering what I could do with them. One woman in Moria explained to me that black clothes are particularly helpful while fleeing to safety, since you can hide better by night. The form was intended to depict a life vest, the quintessential symbol of flight over the Mediterranean Sea. I colored the shirts black, so that the fabric could serve as the starting point for vests. Because I used a plant-based dye, the result was more purple than black. As it happens, purple as a symbolic color for transformation proved an even more appropriate theatrical statement for this project. Seamstress Inessa Reifschneider sewed an initial version of the vest to serve as a prototype.

Those interested in taking part in serial production of purple life vests are invited to bring dyed, pre-worn office shirts to the studio. You are naturally welcome to perform the dyeing yourself (please use only plant-based dyes). Experience dictates that used shirts can be found in any second-hand store. 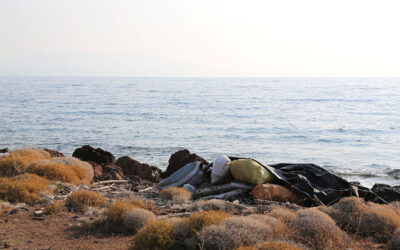 EXPERIENCES ON THE SHORES

It wasn’t until I got to Lesbos that I became clear that the refugee situation on the Greek islands presented ecological challenges as well. Many of the tools they used to flee were abandoned on the shores. NGOs try to help through beach cleaning campaigns. In the northern part of the island, there was a collection point for abandoned flotation devices — a ‘life vest graveyard’ — and various ideas about reworking these into things like handbags or wallets.

MY CONTRIBUTION TO THE EXHIBIT

In the initial months after my return from Lesbos, I did some experimenting using the sewing machine. I wasn’t particularly pleased with the results. With the support of costume designer Gesine Habermann from Frankfurt, I created my own piece for the exhibit, under the title “Long Time no See.” The clothing artwork itself, a set of photographs and a documentary film to accompany it were already available for viewing in Freiburg at the Karl Rahner Haus (Link to “Long Time No See”). It will also initially be available for visitors to try on in “Textile Touches of Escape and Migration.” 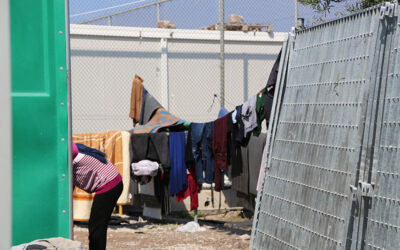 EXPERIENCES IN MORIA AND THE CLOTHING CIRCUIT

I chose not to publish photos of the people with whom I’d had such close contact and who recounted their stories, often highly personal; this seemed like a necessary step to protect their privacy. Yet one story in particular touched me deeply, and I feel the need to share it here. It was the story of a young Afghani woman, herself a fashion designer! She fled Afghanistan because her parents had married her to a man thirty years her senior, to be his fifth wife. In love with a boy her own age, she fled to Iran, where she successfully completed a program in fashion design and went to work designing for film and television. When her family tracked her down, she was forced to go underground, as otherwise she would have been stoned to death for adultery.

It quickly became clear to me that of the individuals I met in the Moria camp, nearly none were still wearing their original clothing. Clothing had had to be swapped out at multiple stations along the route (from Afghanistan, Syria, North Africa… to Moria) . The refugees who were picked up at the time by Frontex or other NGOs and brought to Lesbos generally gave up their wet garments when first entering the camp, and were immediately provided with dry ones. To be more precise: with dry clothing that had been left behind by other refugees and which, having been washed, were now being provided to the new arrivals. A clever system that contributed to people perpetually slipping into a new clothing identity.